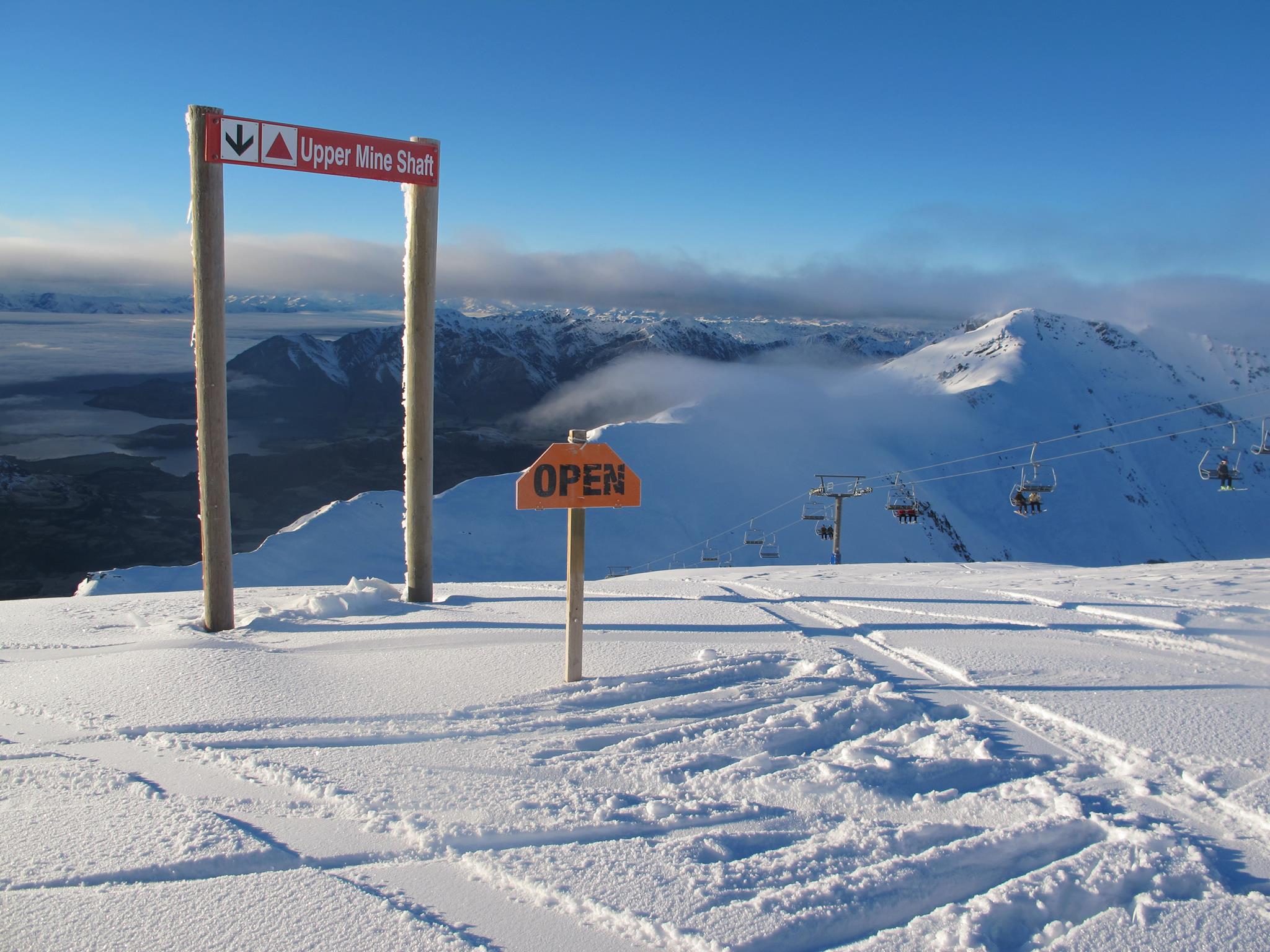 This is a tale of two South Island NZ ski resorts: Treble Cone and The Remarkables.

They are very different but each does their job well with a recent trip confirming that neither actually conforms to their popular stereotype.

For example, Treble Cone has a rep that it’s an experts-only mountain, while The Remarkables is known as a place that only beginners should visit.

Neither is true. I skied both resorts last week and here are my thoughts.

It has a 1586 metre base and generally much better snow that its local resort rival, Coronet Peak.

The road up is an NZ classic – long, curvy and precarious in parts with amazing views providing a dangerous distraction.

On arrival you park below the resort and catch the shuttle to the base building.

There are several car parks and on a busy day you may have to park many kilometres down the road.

Fortunately that wasn’t the case when we were there with well less than 1000 skiers, most of them beginner to intermediate.

It’s true that The Remarkables is a great place to learn to ski or board, with several lifts serving wide open beginner runs.

But there are also some excellent off-piste opportunities to keep experienced skiers and boarders happy.

Most of these are accessed from the Shadow Basin. Some you can traverse to, others require a hike.

On the food front, The Remarkables offers the kind of stuff you’d find at a football stadium in a smart new base building.

To sum up, The Remarkables catches lot of sun, has good quality snow, excellent views and is an ideal mountain for groups of mixed ability.

However, staff need to work harder on food and beverage.

PS: One gripe, the only visible clock on the mountain is set to the wrong time – can someone fix it already…

But it’s the terrain, snow and views these lifts access that matters.

You suspect that’s why it was voted New Zealand’s best ski resort in 2013 and 2014 in the World Ski Awards.

Like The Remarkables, Treble Cone is accessed via a dirt road that can get edgy at times, especially when there’s been rain or snow melt – icy ruts ain’t fun. But the resort is.

TC, perched high above Lake Wanaka, has some of the best views of any resort in the world.

And the snow is good too with TC getting more from the north storms that any other resort in the region.

Lifted vertical is 700m while the resort claims 550 hectares of skiable terrain – the most on the South Island – 10% beginner, 45% intermediate, 45% expert.

Skiing with my fast-learning 14yo son, I found TC to be an excellent mountain for all abilities; for someone who wants to progress, TC is ideal.

Sure there are natural half-pipes, chutes, cliffs, jumps etc but there’s also heaps of great intermediate skiing, which the resort is increasing each year.

Lunch is also good (less of an emphasis on fried food than other resorts) though the restaurant can get over-crowded.

Service at the resort is friendly, professional and pro-active. For example, I was putting on my jacket and knocked over a bottle of Coke.

A staff member saw this, picked up the bottle, said “it happens” and brought me a new one. Impressive.

In summary, Treble Cone is a special mountain and everyone who loves the snow should make the effort to get there.

And it would be even better, if they had another lift or two to access more of that wonderful, wish I could get there terrain…